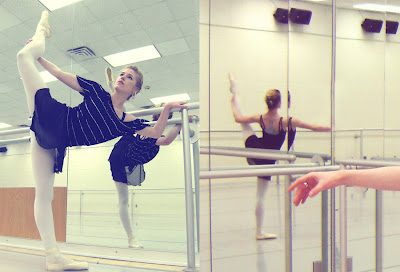 So, I am a comm. major with a broadcasting emphasis, and last semester I was in a class called broadcast multi-media video journalism with a good friend of mine. She is an adorable and talented videographer (I didn't even know that was a word until spell-check didn’t underline it). Anyway, she wanted to film something on campus for her next news package but didn’t know what to do it on—so I told her she could film the dance class I was headed to right after class.

So she shows up with her broadcasting kit and tripod. These kit consists merely of a 50 lb. container, and a 0.5 lb. camera. There was one semester when I had classes arranged is such a way that I had to carry my dance bag, art bag (yeah the huge black ones), laptop bag, broadcasting kit, and tripod around…it was amazing. When my back started hurting I began trying to leave stuff at home, “No, I don’t think I need that extra pencil in here today”. People on campus would walk by me with this look that I can hardly explain… It was half: Oh I feel so bad for that bag-lady, I mean girl, and half: I am SO glad that is not me. Anyway, our instructor introduces her, and I could almost feel the other dancers glaring at me through their smiles for not giving them advanced notice or something. I mean come on people—I didn’t know either! If I had I probably would have rethought my itty bitty super-staticy little blue skirt, that generally disappears half-way through class under my big baggy t-shirt. And…my hair…well that’s another story.

Anyway, she filmed most of the class and later on that evening she asks if it was ok if she turns the focus from the ballet program to me. I said yes, thinking of how funny class would be with me, her, and everyone else watching the video of me that she filmed. “Oh, you do…ballet? Hmmm, that’s, nice.”…long silence.
So anyway I am not sure what my favorite part of this video is, my half-missing skirt, my hair, my random mess-ups (not an on day that’s for sure!), or the me-after-dancing-for-hours-look. Probably all of it! But either way, I think she did a great job! So after this unnecessarily long introduction I introduce her package "beauty and the ballet"...